The experienced storytellers of The Birmingham Stage Company certainly know what it takes to please a young audience. After recent sell-out Oxford Playhouse performances of George’s Marvellous Medicine and Danny the Champion of the World, they are packing in the punters again with writer Stuart Paterson’s version of Rudyard Kipling’s The Jungle Book.

On tour since 2005, this gripping production (director Neal Foster) follows Kipling in not glossing over the harsh realities of jungle life. That this is a world whose inhabitants must kill or be killed is never forgotten. We see “nature red in tooth and claw,” in an oft repeated phrase — first coined, of course, by Lord Tennyson — from one of the catchiest musical numbers by composer BB Cooper and lyricist Barb Jungr.

For this tour the role of hero Mowgli is being handled very capably by SamuelHargreaves, a young actor straight out of Liverpool Theatre School. His winning stage persona and excellent singing voice augur well for his career prospects.Mowgli’s good humoured approach to life, coupled with his regard for loyalty to family and friends, clearly won him many friends among the rapt youngsters around me in the stalls on Tuesday afternoon.

As his arch-enemy, the man-eating Bengal tiger Shere Khan, Peter Sowerbuttsexudes precisely the right degree of self-regard, contempt for others and sheer malice. Possessed of a very powerful voice, he is further assisted in inducing fright by the truly blood-curdling growls supplied by sound designer Nick Sagar.

The ‘good’ characters are no less well-presented, among them Mowgli’s chief instructor in jungle law, the affectionate brown bear, Baloo. Iwan Tudor and Natasha Lewis win hearts, too, as the wolves Akela and Raksha, the lad’s adoptive ‘parents’. There are other notable performances from Laura Waggott as the python Kaa and Zephryn Taitte as the arrogant hunter Buldeo. It’s a fine holiday treat for the kids.

Having seen the excellent adaptation of George’s MarvellousMedicine by The Birmingham Stage Company last year I had great expectations for their presentation of Rudyard Kipling’s classic The Jungle Book.

I was not disappointed. This was a visually stunning, high-energy performance with music, song and dance. The classic story of Mowgli, a young boy raised in the jungle by a family of wolves was enhanced by spectacular puppetry, atmospheric sets and lighting.

Equal measure of comedy and menace kept the young audience delighted, with flatulent monkeys, and hilarious boisterous interplay between Mowgli and his mentor, Baloo. Shere Khan, the tiger, played by Peter Sowerbutts filled the stage with his sinister presence, on occasion causing a few children to jump out of their seats!

The music and songs were magnificent too, the highlight for me was mad, bad jackal, Tabaqui (played by Craig Painting) delivering a slavering performance with Barb Jungr’s lyrics of how mad, bad and dangerous he was to know. Genius.

Extravagant costumes, exuberant performances and a healthy respect for Rudyard Kipling's original story about a boy raised by wolves ensured this stage adaptation for families was exceedingly good.

The Birmingham Stage Company's players hurled themselves into their animal roles with terrific physicality, embodying the movements of the big cats, apes and wild dogs who battle for control of the man-cub Mowgli as he comes of age.

Young first-timer Samuel Hargreaves played the mischievous Mowgliwith a wide-eyed wonder that turns eventually to world-weariness when he realises his beloved jungle is no place for a human.

His teacher and best friend Baloo the bear was given the right mix of gruff and gormless by the giant Rob Hughes, while Peter Sowerbuttsdripped feline menace as his arch-enemy, the tiger Shere Khan.

The detail in their animal outfits coupled with the moody lighting and backgrounds drew the audience into the undergrowth, and Mowgli'sstruggle to fit in was surprisingly poignant and mature, though the pratfalls, monkey-shines and songs ensured things never got too serious.

But Disney fans be warned: though there are plenty of tunes to enjoy here they are all original compositions for this stage production, so don't expect The Bear Necessities or I Wanna Be Like You.

Even without those toe-tappers, The BSC's The Jungle Book is a sumptuous and satisfying version of a kids' classic that can be enjoyed by all. 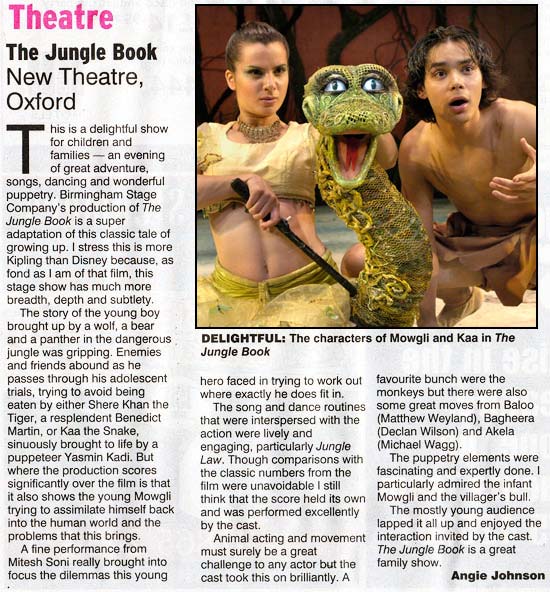 The Birmingham Stage Company’s production of THE JUNGLE BOOK is a rip-roaring family show using the full force of musical theatre – a jungle beat of thunderous music and vigorous dance routines – eliciting a wildly enthusiastic response with every number. For sheer energy, this exhilarating production ticks all the boxes for families looking for an uplifting treat! 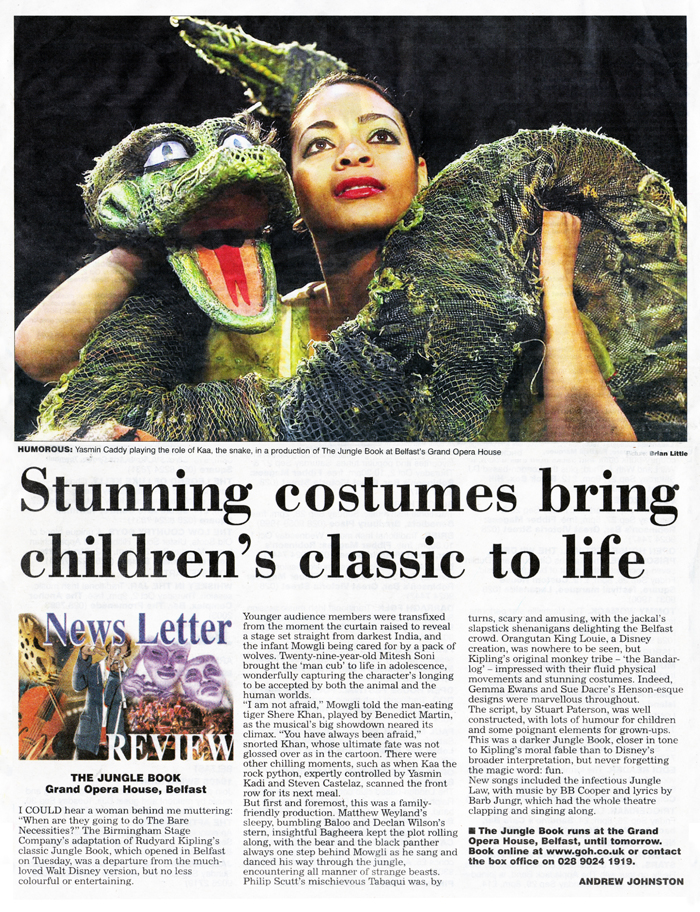 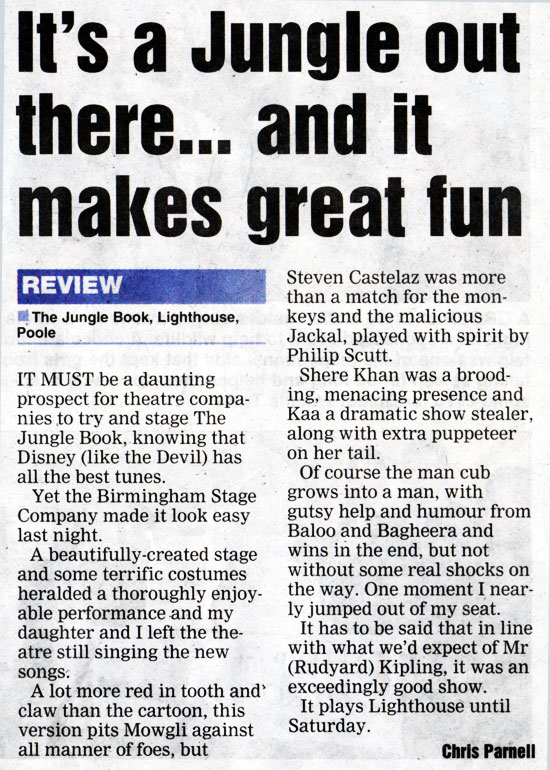 THE JUNGLE BOOK at The Swansea Grand

Birmingham Stage Company is rightly renowned for the high standard of its productions and this splendidly realised version of the well-loved Rudyard Kipling classic - adapted by Stuart Paterson and directed by Neal Foster - is as good as it gets.

Everyone knows the Disney cartoon, of course, and it is fair to say that there are elements of this here, but there are darker elements which give a little extra weight and meat to the piece.

Steven Castelaz makes a likeable and sympathetic Mowgli(the young Mowgli is introduced in the guise of a fabulously animated puppet), while Benedict Martin is well cast in the role of predatory tiger Shere Khan.

One of the most impressive aspects of this production is that the dignity and order of animal hierarchies is measured against the brutishness of mankind: the message is clear and the accuracy of the way in which the animals are portrayed the movements are supervised by Peter Elliott, who worked on movies such as Greystoke and Gorillas in the Mist)is absolutely fascinating.

Shakespearean buffs might also get a kick out of the clever way in which some of the lines are teasingly redolent of those penned by the Bard.

On a point of pedantry - since the story is firmly based in India and features a host of native animals such as the tiger, rock python, wolf and Asiatic jackal - one wonders exactly how an orang-utan slots into the scenario. But since it gives us another chance to see the beautifully articulated costume from the company's revious success, Kensuke's Kingdom, one can easily forgive the incongruity. 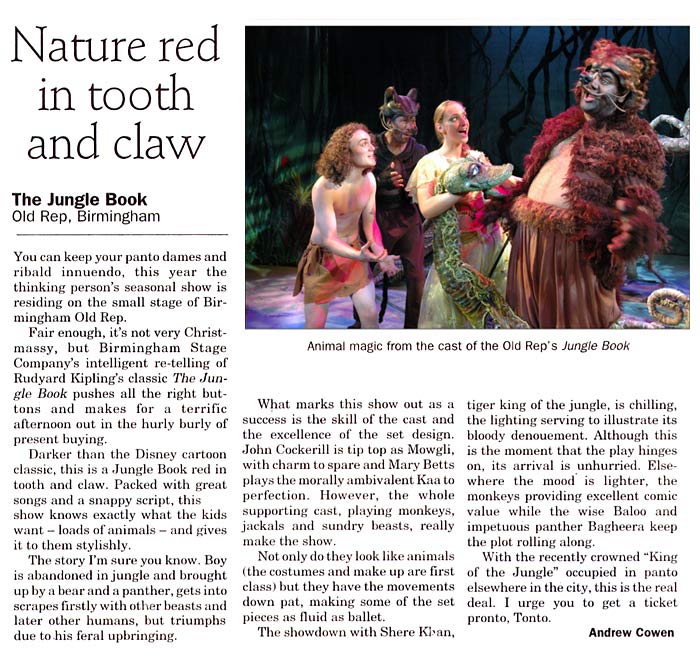 Lion King beware! A new herd of animals now roaming the country is about to challenge your supremacy in the West End of London. An adventure story full of thrills, spills, excitement and fun - spiced with love and tenderness - and enjoyed by an audience ranged from five to eighty-five!
Theatreworld

The quality of the show is as high as the jungle tree-tops, the sets are lush and the characters and costumes enchanting. This is a top class production, a tropical cocktail of intense and comical moments, shaken and stirred with heart-stopping dangers and surprises. Don’t miss your chance to grab the vine and swing into the theatre
Telegraph

Birmingham Stage Company judges the blend of fear, wonderment, danger and discovery with seasoned skill. The jungle world is played out with superb animal movement in this exceedingly good journey into Kipling country!
What’s On

The Birmingham Stage Company is Britain’s top producer of imaginative family shows. In the past decade The BSC has taken on challenging subjects and built an enviable reputation by the way it has handled them. THE JUNGLE BOOK adds to its impressive record by delivering two hours of first-class family entertainment
Nottingham Evening Post

When you are up against a Disney classic loved by millions, you have your work cut out to produce a show that’s entertaining, fast moving and fun in comparison. The Birmingham Stage Company does exactly that with its production of THE JUNGLE BOOK. The highlights are the foot-tapping new songs, every one as catchy as those in the film. It’s fun, it’s poignant and it’s entertainment at its very best. A true children’s hit. Catch it while you can
Darlington News