David Auburn is clearly a late-Romantic. His brooding, well-shaped play argues that true genius can tilt over into madness - read Baudelaire if you need convincing. But here the theme is set around an ageing maths genius, Robert (Terence Booth), who dies after a mental collapse.

Former student Hal (Neal Foster) turns up in the shabby Chicago house, to examine Robert's papers, discovering in the process a world-shattering theory which nobody seems quite to understand. Hal's uneasy involvement with Robert's troubled daughter Catherine (Sally Oliver), who is tormented by demons, is the point where Auburn shows his paces best and provides fascinating theatre.

As Catherine claims authorship of the important mathematical breakthrough and leaves for New York, we are left in doubt - did she or didn't she? But this is truly a wonderful evening's theatre, with a quartet of superb actors managing Auburn's fine text, which occasionally falls seamlessly into the past, such as when we see Robert encouraging Catherine to pursue a career as a maths specialist. Foster, who rarely puts a foot wrong, plays Hal with the sweet naivety of an American college boy, caught up in something he never fully comprehends. The sequences between Foster and the equally gifted Sally Oliver resemble a highly professional tennis match where the ball never goes out of court. John Harrison's careful direction certainly takes The Birmingham Stage Company to new heights. 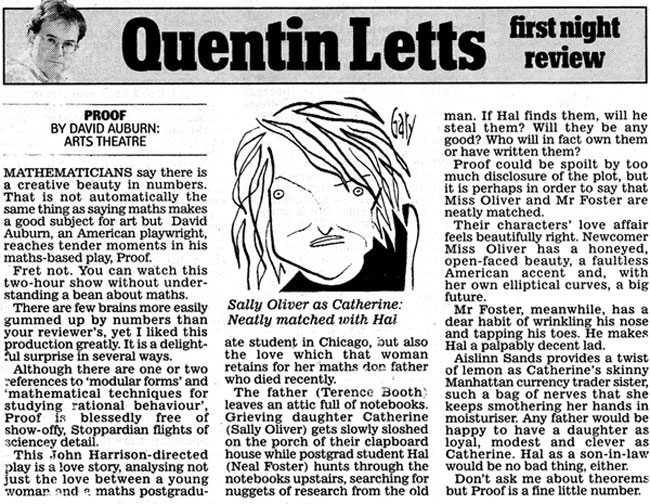 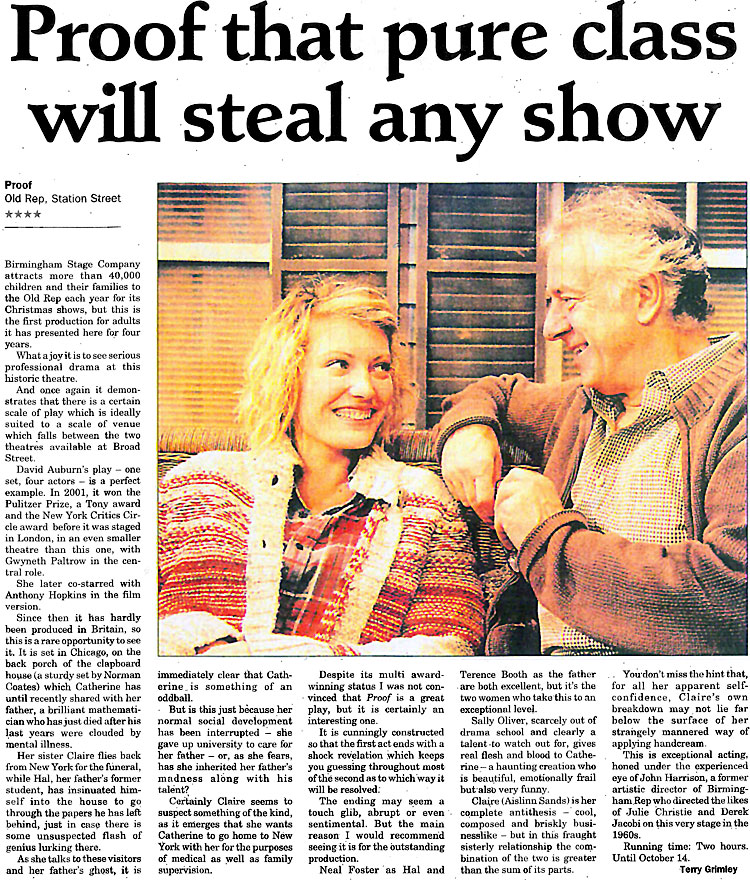 Here is a drama of human relationships. In John Harrison's beautifully understated production, four people work out their fragile loves, hates, anxieties, hopes and desires. The setting is unlikely - the house of a Maths professor in a Chicago University. But the emotions are real, real to us all, and we are gently encouraged into these characters' drama.

Robert is a one-time professor of Maths with a world-wide reputation for his discoveries. Having suffered some kind of breakdown his daughter, Catherine, has given up her studies to look after him. But she, too, appears to be a maths genius - or does she suffer delusions too? Into the relationship steps Hal, younger mathematician, sorting through Robert's notes to see if there's anything worthwhile. A world-shattering proof is found in the notes - but who discovered it, Robert or Catherine?

The proof is about large prime-numbers, but don't let that worry you! The stuff of the play is humanity.

Sally Oliver (Catherine) and Neal Foster (Hal) take us on their journey. Oliver creates a Catherine that combines an outgoing energy with a nervous edginess; an accomplished performance - we don't want her to be living through a breakdown, but we can't be certain she isn't. Foster's Hal is marvellous. Incredibly gentle, we experience his love for Catherine and weep at his simple inability always to express it. Yet he is far, far from mathematical geek - this is a man we all like. The scenes between them are beautifully touching - by turns, raw, painful, joyous.

Terence Booth's Robert (Catherine's father) brings a worldly good humour to the play, while Aislinn Sands is Catherine's sister - reasonable, precise, from the world of commerce, how we dislike her but feel guilty for doing it."